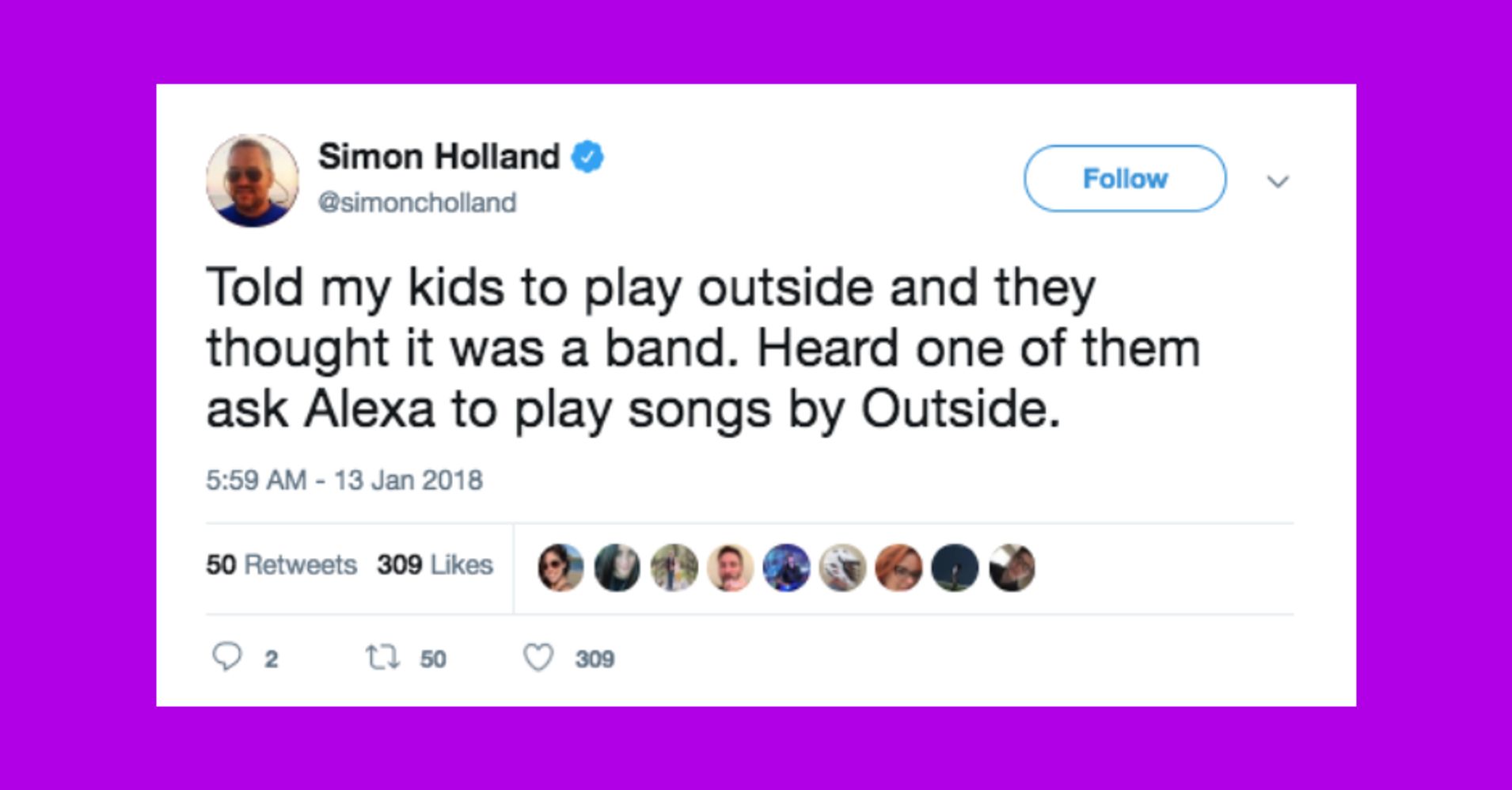 Having artificial intelligence assistants like Amazon’s Alexa and Apple’s Siri in the house can be helpful, frustrating and hilarious all at the same time ― especially when there are children at home.

Whether parents are turning to the devices for their kids’ homework or the little ones are using it to drive their families even more nuts, the assistants are responsible for some laughable situations.

My kids never take my word for anything unless they’ve confirmed that I’ve “asked Siri” first.

My toddler asks so many questions that even Alexa has taken up drinking.

Told my kids to play outside and they thought it was a band. Heard one of them ask Alexa to play songs by Outside.

Why do farts smell bad but apple pie smells good? Just one of the questions my kid’s ask Siri and why I probably owe her an apology or 12.

Google Home. Amazon Echo. Really? The last thing I need in my house is more talking and less self-restraint when ordering from the Internet.

Kid: Alexa, play What Does the Fox Say again!

Parent: Alexa, do you have a setting where you can not respond to my kid’s commands?

Thanks, Alexa, I DID want to teach my kids that shouting commands in rapid succession is the way to get whatever they want in this world.

I’m totally ready for THE conversation. When she asks me how babies are born, I know exactly what I’m going to say.

I was asking Alexa to do things but she kept ignoring me & OMG SHE TURNED INTO ONE OF MY KIDS.

I can never ask Alexa anything without sounding like I’m scolding a toddler.

Sunday mornings are for sleeping in unless your child loudly asks Alexa how many days until Christmas at 5:45 AM.

I finally got Siri so now there’s one more thing in this house that doesn’t understand a damn word I say.

Just bought an “Alexa” to take with me on the road.

I asked her to argue with me and make a lot of noise while I’m sleeping so it feels like home.

7: (silently sneaks up behind me and taps me on the shoulder)
Me: Yes?
7: (whispers into my ear) Do not trust Siri. She doesn’t have eyes. (Walks away)

Who needs scary movies when you can just have kids?

My Google home recorded me mid-rant when I was making my shopping list, so when I asked for an updated list it just read out:

-tuna
-I need to get the fuck out of here.

Don’t you dare make fun of toddlers for talking to themselves if you’re opening up to Siri like she’s family.

I’m fairly certain that Siri was invented by a parent who was utterly exhausted from answering all of their kids constant questions.

Did you ask your Aunties Siri and Alexa?
– Me whenever my son asks a question

Me: Alexa, make my kid get ready.

Me: *finds out Alexa in fact, does have a skill to make kids get ready*

Just a heads up, we’re at that point in the day when even my Amazon Alexa won’t listen to me.

Unlike Alexa, I can not unplug my toddlers.#dadlife

I don’t want Alexa because I can’t have another person in this house who doesn’t listen to me. Between my family and Siri, I’m done.