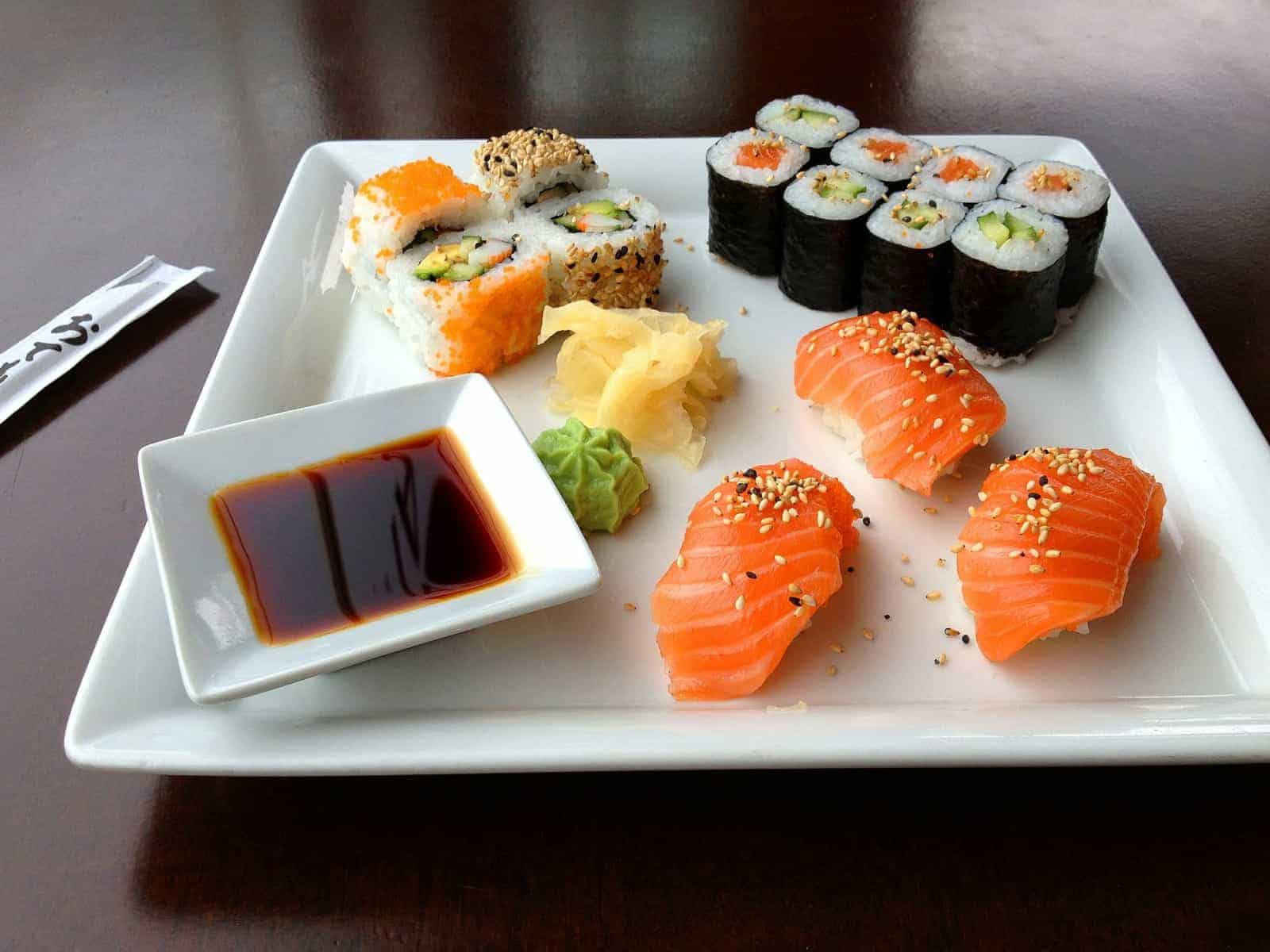 Sushi is quickly becoming as much a part of American cuisine as apple pie. Today, sushi can be found in local supermarkets, airport terminals, and even movie theatres. With places popping up everywhere to get your sushi fix, more Americans are becoming connoisseurs of the classic Japanese dish. Even though sushi has been around for more than a thousand years, it did not make its way to the US until 1966 when the first sushi restaurant opened in Los Angeles. Currently there are over 4,000 sushi restaurants in the United States and they generate over $2 billion in annual revenue. 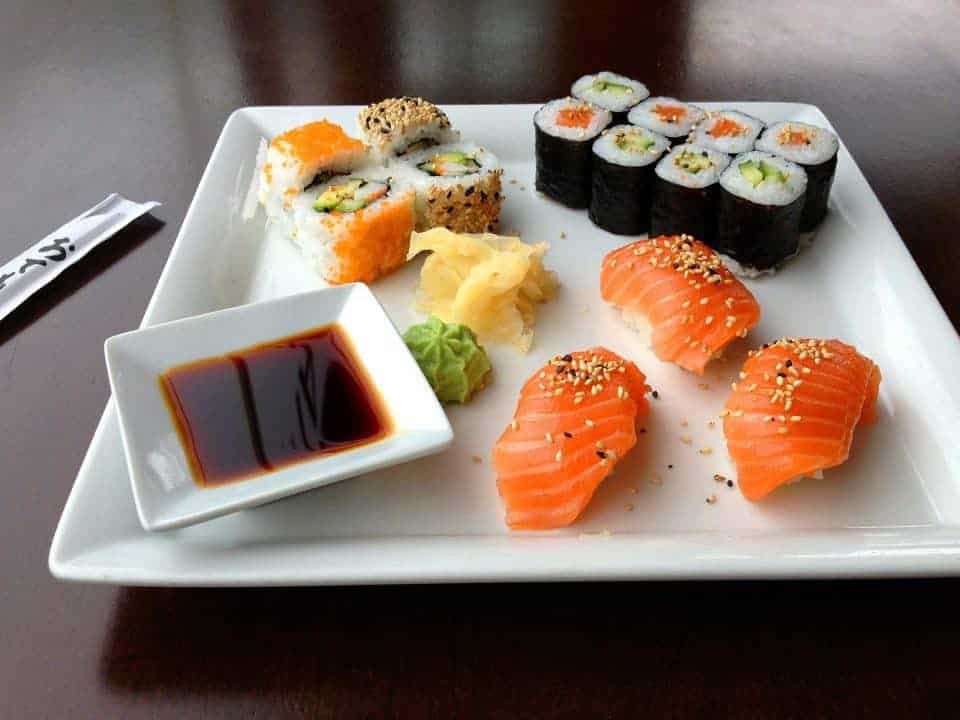 Sushi is a Japanese dish consisting of small balls or rolls of cold cooked rice served with a garnish of fish, meat, vegetables, or egg. The rice used in sushi is a short-grained rice seasoned with salt, sugar, and vinegar. This combination is what gives the rice its sticky consistency that helps hold its shape. There are 5 main types of sushi:

Nigiri
A topping of usually fish served on top of sushi rice
Sashimi
Just the fish or meat served alone without rice or other ingredients
Maki
Rice and fillings like vegetables wrapped in seawood
Uramaki
Similar to maki, but the rice is on the outside and seaweed wraps around the filling
Temaki
Sushi that has been hand-rolled into a cone shape

Sushi is accompanied by 3 key condiments: soy sauce, pickled ginger, and wasabi, a green paste made from Japanese horseradish. Soy sauce is used as a dipping sauce and wasabi is used to give sushi a spicy pungent flavor. Americans usually eat their sushi with small pieces of ginger but overseas, the pickled ginger is used to cleanse the palate after each sushi course.

It’s Not All Raw 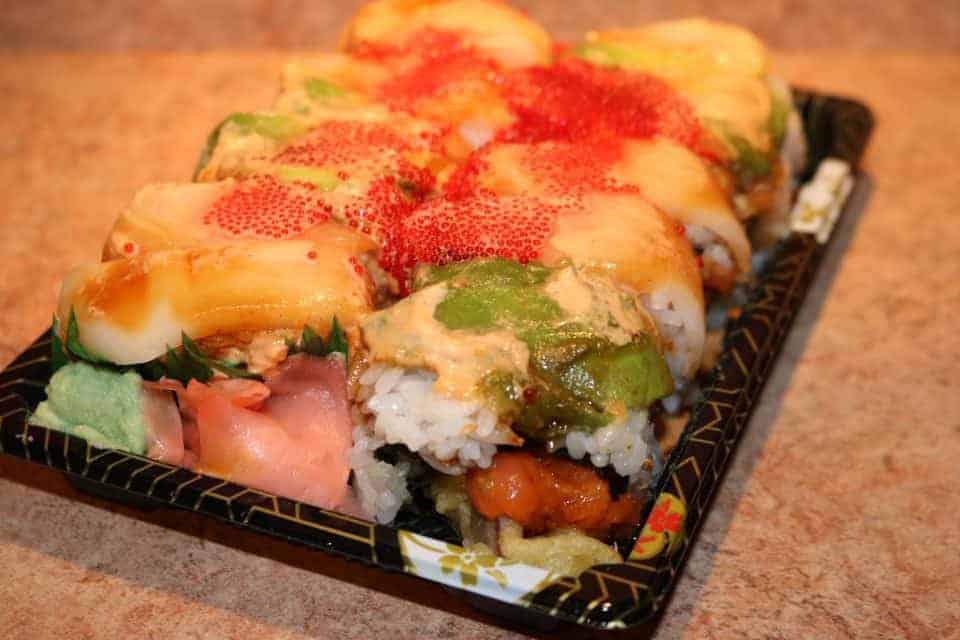 Even though the popularity of sushi has grown, there are still a large number of Americans who can not jump on the bandwagon. When most people hear the word “sushi” they immediately think of raw fish, but most fish has been prepared in some fashion. Even though it might look raw, most fish in sushi dishes has gone through some type of pickling or blanching process. There can be a quite a bit of preparation to the fish before it meets the rice. Even though some sushi varieties contain raw fish, there are a lot of varieties of sushi that do not contain one piece of raw fish. In America, you can find sushi with cooked imitation crab, smoked salmon, grilled squid or octopus, fully cooked shrimp, and fully cooked clams. There are also plenty of vegetarian varieties. 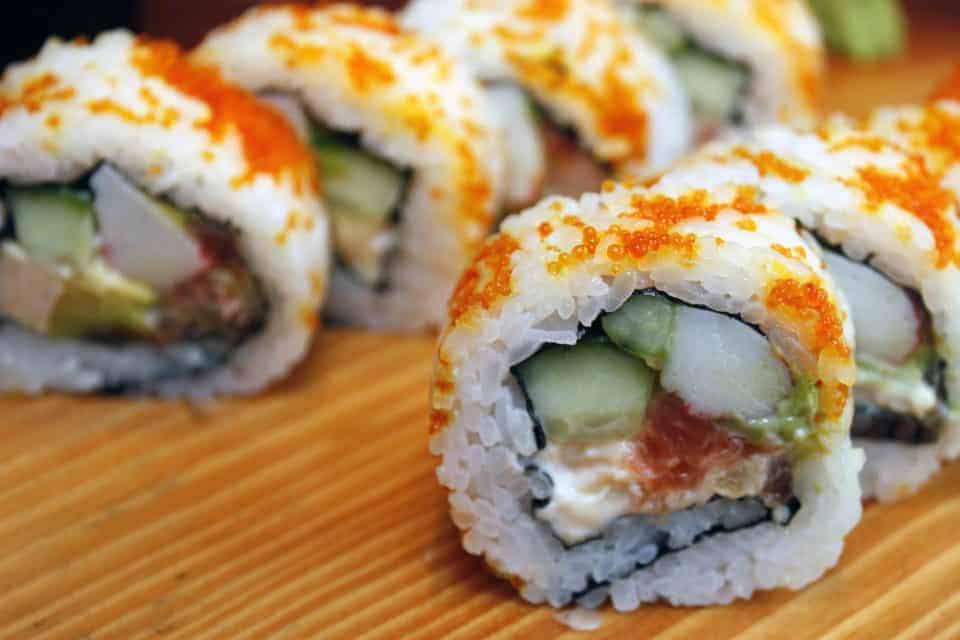 It is not surprising that most people shy away from even trying sushi when in almost every menu there is a disclaimer about eating raw and/or undercooked eggs, meats, poultry, and seafood. Don’t let the unknown or misconceptions stop you from trying something new. Yes, trying sushi for the first time can be very intimidating and scary. So let’s see if we can break down some sushi barriers and open a path that can lead your taste-buds on a new adventure.

Best Sushi for Beginners to Try 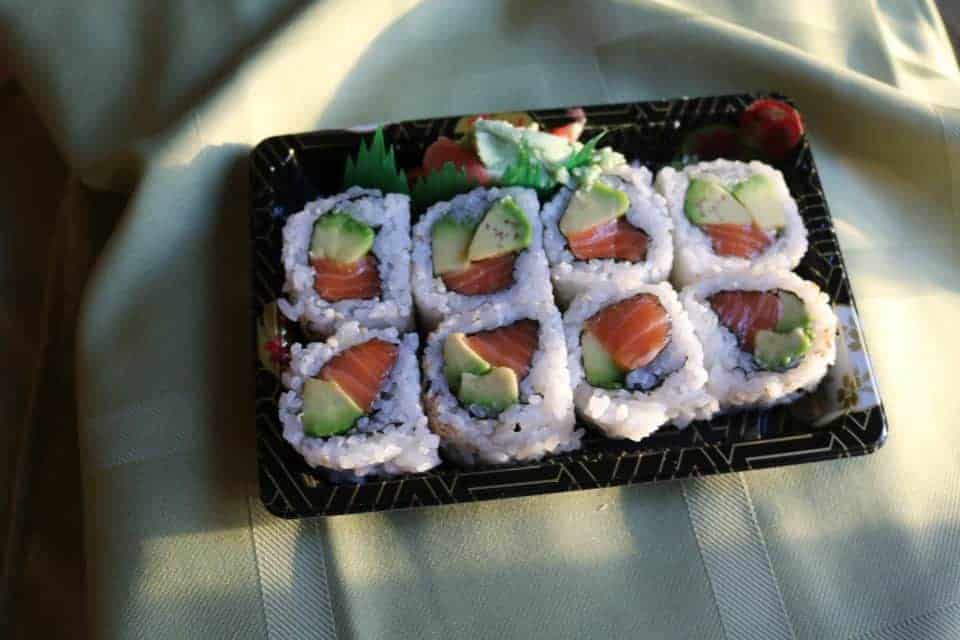 For a sushi beginner, you may want to try the cooked versions first. Eel (unagi and anago) is always served cooked, usually with a sweet and savory sauce. A California roll contains avocado, cucumber and cooked imitation crab meat. You can also try sushi with grilled squid (ika) or octopus (tako). Shrimp (ebi) is also a good cooked sushi option. Sushi restaurants most always offer sushi rolls out of items that are cooked tempura style (battered and fried). Some of these rolls (maki) are actually quite good.

Once you are ready to venture to the side of more traditional sushi, start with ingredients that you are familiar with. If you like baked or grilled salmon, try a sushi roll with smoked or cured salmon. Do you like calamari? Try the squid (ika). Do you like scallops? Scallop sushi is very similar to a seared scallop dish that you will find served in a restaurant. Shrimp (ebi) is also widely served. While there are many fish varieties in sushi, there will be plenty of varieties you are familiar with that you may want to try for the first time in a sushi version. 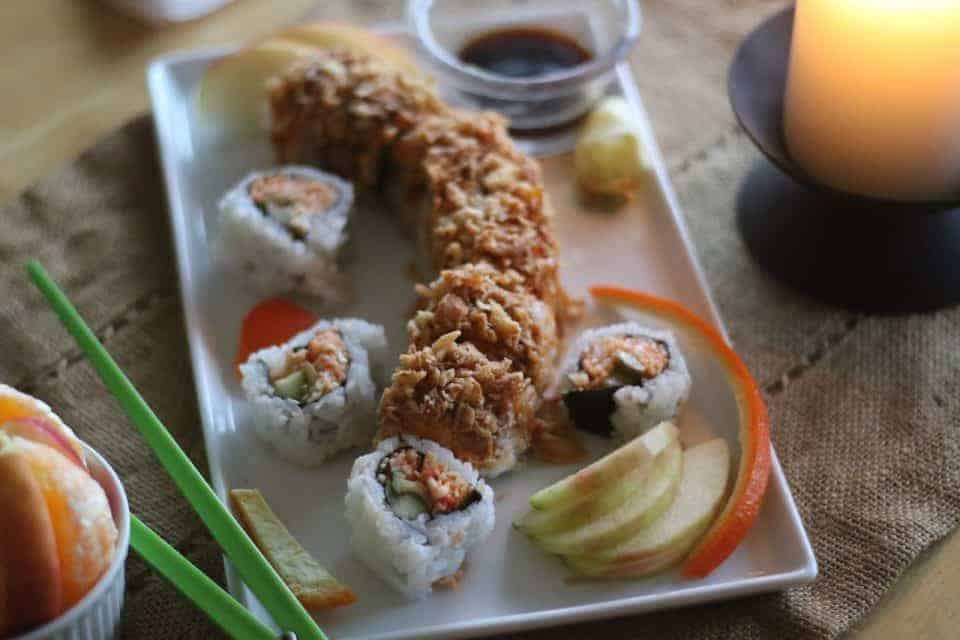 It’s a good idea to also start with cut rolls (maki) instead of sashimi varieties, especially if the thought and sight of eating raw fish might be a turn off. With the cut rolls, the items are inside and rolled in between vegetables and/or rice which can be a bit more appealing to some people. Sashimi, on the other hand, may be one of your last versions of sushi to try since it consists of nothing more than a chunk of raw fish.

Many people find even cooked fish to have very strong smells. When trying sushi for the first time, try items with the least ‘fishy’ smell. Sushi with milder fish ingredients such as scallop (hotategai), red snapper (tai), squid (ika), and halibut (ohyo) are particularly mild, and are great for beginners. Tuna (maguro) may look strong due to it’s rich, dark color, but it is also a very mild fish, and a very common item on sushi menus. 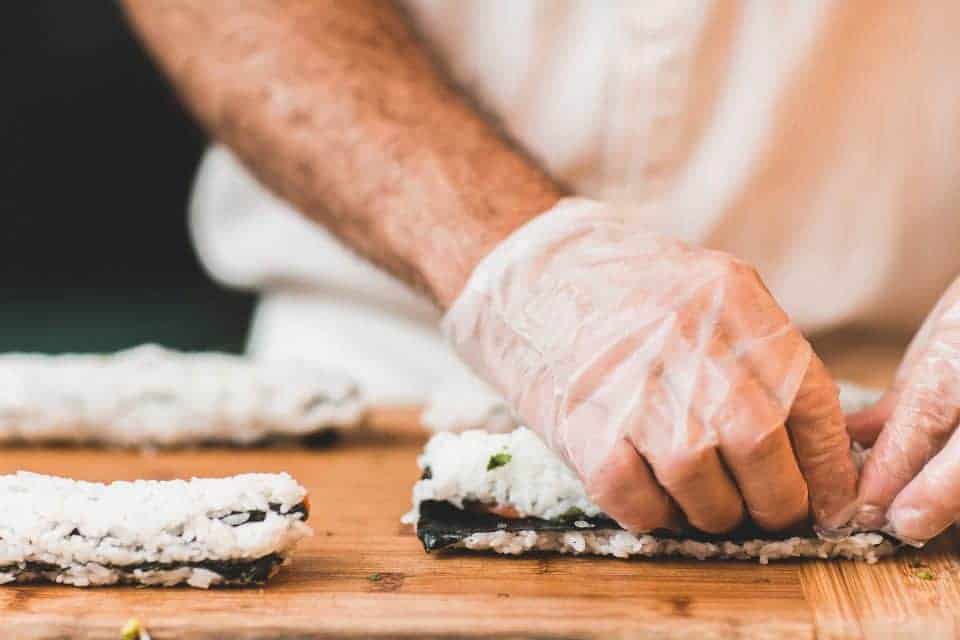 If you are still unsure of what to try, don’t hesitate to ask the chef for their recommendations. Remember, everyone has different tastes and just because a friend likes a particular sushi item doesn’t mean you will like it too. Don’t let others force or guilt you into trying something you are not comfortable with eating. Try sushi at your own pace. You don’t have to try every variety in one sitting. It is ok if you don’t turn into a sushi fanatic. Be open, relax, grab a pair of chopsticks, a glass of sake, and enjoy!

For more foods you may not think to try, check out 10 Edible Flowers and Recipes You Can Try. 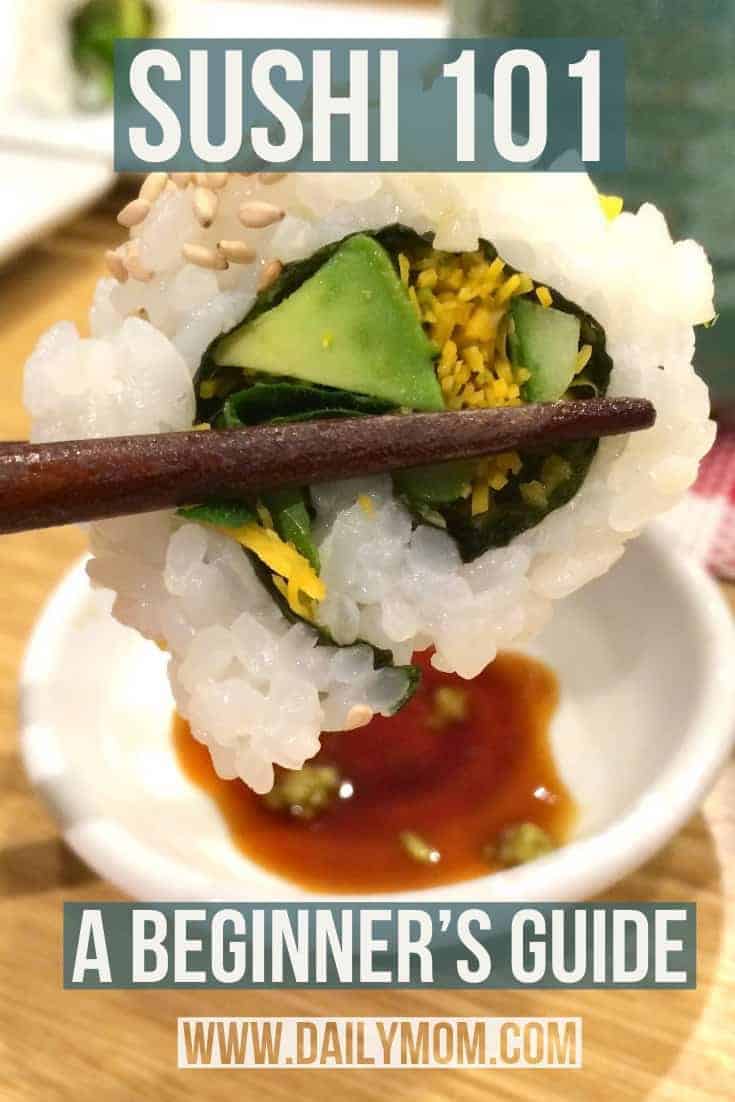 Source: Sushi Restaurants in the US: US Industry Market Research Report