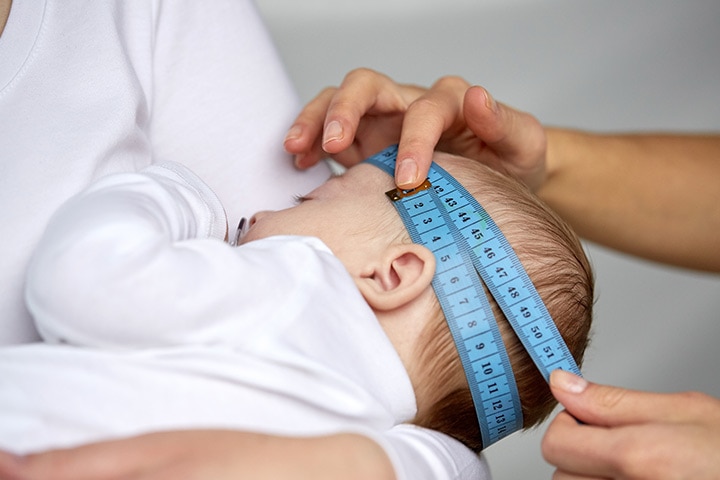 What causes macrocephaly in babies and how do parents deal with it? In this article, MomJunction acquaints you with the reasons behind disproportionately large heads in infants and if there is a cure to the problem.

What Is Macrocephaly In Babies?

If the circumference falls within the healthy range for their age and gender, then it is considered normal. Medical experts define macrocephaly as a condition where the baby’s head circumference (in centimeters or inches) is greater than the 98th percentile (2). There could be several reasons for macrocephaly.

What Causes Macrocephaly In Babies?

Here are a few reasons why an infant could have a large head or develop one (3):

There could be situations where macrocephaly is a normal occurrence. In such cases, the baby will not display any health-related symptoms and will grow normally. There is nothing to worry in such situations. Nevertheless, if you suspect the infant’s skull to be going out of shape and disproportionate to the body, then do not hesitate to see the doctor.

How Is Macrocephaly In Babies Diagnosed?

Physicians measure the height, weight, and head circumference of the infant and are likely to detect macrocephaly during a routine checkup in the first year of the baby’s life. Doctors will use the following tools to check for the underlying condition that led to a large head in babies:

So the doctors may use a bit of sedation to keep the infant still within the MRI scanner. Several hospitals now perform a “Quick MRI” without sedation, which is advisable for pediatric patients although this form of MRI has limited image rendering capabilities (8).

Once your doctor has the diagnosis, they will recommend the best course of treatment.

How Is Macrocephaly In Infants Treated?

The treatment of macrocephaly depends on the cause of the condition. Options include:

You can contact support organizations and trainers that specialize in dealing with infants with disabilities. Such resources can help train parents about coping with the condition and improving the infant’s quality of life.

A large head in babies could be a normal or a result of a serious problem. In either case, your baby’s doctor is likely to diagnose the condition during a routine assessment. Management of macrocephaly is crucial in cases where the cause is incurable. Make use of the resources at hand to ensure a better quality of life for your baby.