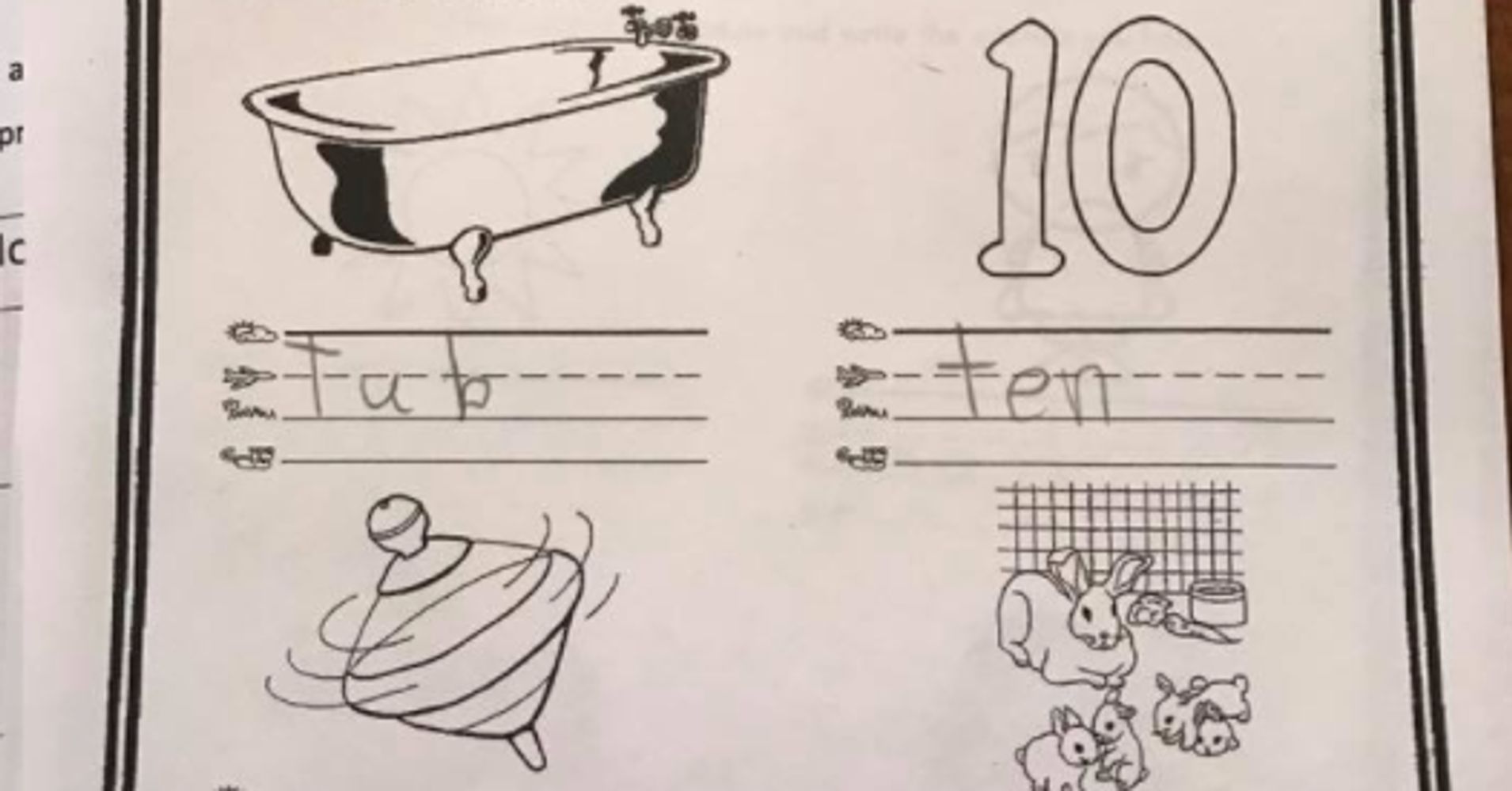 Homework is not just the bane of many students’ lives. It can also lead to major frustration for their parents.

Sometimes a homework question comes along that is so confusing, it stumps kids and parents alike. And many of those frustrated adults take to social media to share their bewilderment.

We’ve rounded up eight such problems that have made waves online over the years ― or came to us directly from the HuffPost Parents community.

In 2017, New York mom Royce Winnick posted a photo of her 5-year-old daughter’s take-home worksheet on Facebook and asked if anyone could figure out the answer to the last question. The worksheet focused on the letter T and instructed students to “tap out the word in the picture and write out the sounds you hear.”

While the first answers were simply “tub,” “ten” and “top,” the last one showed a drawing of rabbits with no clear T-word description. “The real answer was ‘vet’ which makes no sense!” Winnick told HuffPost at the time.

The Other Kindergarten Worksheet

Winnick also shared another worksheet with HuffPost that “also had ridiculous answers.”

“The answers to the two bottoms ones are kin and Ken!” she said. “Again, how is a 5-year-old supposed to know that?”

In 2017, a mom named Dusty Sappington posted a photo showing a section of her 8-year-old daughter Izzy’s math homework on Reddit. The problem stated, “Janell had 15 marbles. She lost some of them. How many does Janell have now?”

“To be honest, I’m unsure if it was printed in error or was a question to test her knowledge of less than and greater than, which she has touched on in the past,” Sappington told HuffPost at the time. “Being the mother of a third-grader and a fifth-grader, I have seen a lot of homework over the years that has our family laughing at the absurdities, scratching our heads and relying too much on Google.”

In March, we asked members of the HuffPost Parents Facebook community if they had come across homework questions that stumped them. One user, Malina Mchls, shared a confusing question from her niece’s homework:

“I am German and live in England. I was helping my niece with her German homework and she had to do a family tree. At the end it asked for a relation to a previously unknown family member. It went something like Peter is Mary’s brother and Steven is Mary’s husband, what is Peter to John? Like who TF is John?”

In 2017, the Holderness family shared a problem from son Penn Charles’ first grade homework on Facebook. The caption included the hashtag #mybrainhurts.

“FYI, this was the final page on a 7 page sheet, the previous 6 pages were a much more normal level for a first grader. I don’t think the teacher expects everyone to get this, I think it was meant to be a problem that would challenge the children, so for that reason I think it’s great that our school included it!” dad Penn Holderness noted in a comment.

While this one was a bonus question on a test, it still stumped parents. In 2017, Twitter user mmatigari shared a math question that allegedly appeared on an exam for first graders in Singapore.

The question revolved around a number pattern called a petite circle sum, which most adults appeared to agree seemed a little too difficult for children so young.

In 2016, a U.K. father took to Facebook to bemoan his fifth grade son’s math homework. “Calculate the perimeter of these composite rectilinear shapes,” one problem commanded.

When the Manchester Evening News tweeted the question, many grown-ups expressed their confusion, while others explained how they arrived at the answer.

In 2017, a “trick question” from a U.K. math teacher had a viral moment on Twitter. The question asks: “An orchestra of 120 players takes 40 minutes to play Beethoven’s 9th Symphony. How long would it take for 60 players to play the symphony?”

Twitter user Doug Mataconis shared the teacher’s question along with the caption, “That’s not how this works. That’s not how any of this works.” Many responses suggested equal bewilderment, but the teacher who wrote the problem, Claire Longmoor, clarified that it was a “trick question just to keep the kids on their toes.” Still, as others pointed out, Beethoven’s Ninth Symphony is actually closer to 70 minutes than 40.